Blogs and Reaching Out to the larger community

One of the things I like about blogs is that it's a quick way to make lots of connections. Sure, there is a lot of chaff, and finding those little kernels of value can take some serious sifting and winnowing, but the internets do have search functions, and it's not like one has to invest a great deal of time in things they don't find interesting.

I've been looking at my visit logs and I've seen a big uptick in activity - largely due to my adventure with Steve Austin. I think that points to a needed activity for this blog: more discussion of what the folks at "Answers in Genesis" are up to. This is even more important, IMO, given their attempts at "addressing" some of the standard geological facts that are used to demonstrate this diluvian model is hooey. It's no use trotting out standard arguments if the creationists feel like they have a perfectly valid counter. It's time to update our database of counter-counter-claims.

But parrying YEC's is tedious, and no fun if it's all that all the time. So it's time to bring things back to some snails. Particularly Ice Age snails and the modern snail fauna of the Upper Mississippi Valley. Consider the following two photos: 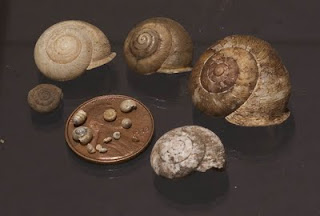 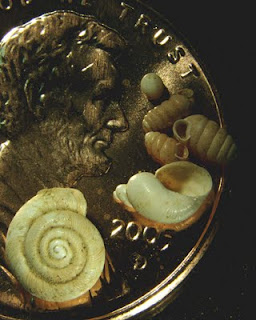 Three important points - one of which requires some background info, which I've touched upon in much earlier posts (and we'll revisit in the future). The other two can be seen in the above photos. One is that the "modern" snail fauna is much more diverse and second, the modern fauna displays a very wide range in body shape and size with a much bigger "upper limit." Just from this observed fact, we can start to ask some questions:


Okay, that's enough for now. A big hello to all my new visitors - feel free to peruse the archives, leave a message, or whatever.
Posted by Unknown at 1:29 PM