Down the Rabbit Hole, third iteration

And so begins the annual "cardboard tube migration," played out on airplanes around the country as geologists bring their posters to the conference. These are becoming more rare, however, as cheap near-site options for large format poster-printing are making boards with a handwritten notes that say, "I left my poster in the Taxi, but here is a pencil sketch of my findings" a thing of the past.

I made it to Portland without too much trouble. I got a brief glimpse of Mt. Hood as we came in to land. The light rail system, "MAX" is quite good. Took me just about an hour to get from the airport to the hotel. I spent much of the flight going over some GSA abstracts published by the field trip leaders. I suspect that this "energy threshold" they are talking about is some attempt at bridging a gap between the gradual, uniformitarian observational evidence we geologists gather in the field, with a general "catastrophist" viewpoint that is often drawn upon to discuss YEC topics such as the flood.

I went over some possible questions - these can be difficult, because interaction with Creationists is often an exercise in rhetoric, rather than any intellectual back and forth. But, I think some questions that may generate some good discussion include focusing on observations, rather than interpretations. Also, given how poorly Austin's work was received by the scientific community, perhaps a question or two if he plans on re-analyzing the dacite from the St. Helens dome - especially now that we have a brand-new dome pushed up.

But that's all for now. Based on an idea I got from today's reading, I came up with "The Intriguing Idea of Everything! (TM)," which I plan on releasing soon. I'm sure these findings will revolutionize all of human society.

I'll leave you with a few pictures from the flight. The first is a "glory." Refracted light as a result of the observer being between the sun and a dispersed cloud of reflective, spherical droplets (e.g. a cloud): 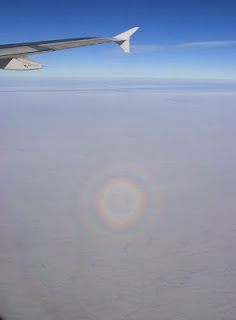 Crank up the saturation, and you can see traces of even more rings: 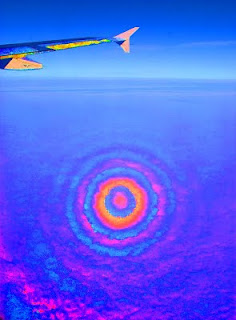 I think I know why the upper left coast is always so rainy: you folks would spend your entire day just looking at the volcanoes from your windows - no work would ever get done. They are so very, very cool. 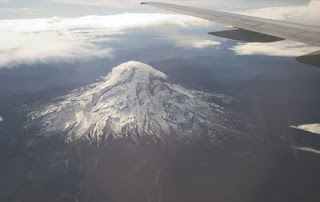 
See the previous entries here (2) and here (1). Also, a shout out to all the USGS people who have been visiting lately.

Update2: A brief discussion about young-Earthism at GSA
Posted by Unknown at 5:55 PM