How did the Driftless Area form?

In the previous post, I talked about the what and where of the Driftless Area. This is a brief discussion on how. During the last Ice Age, the thick sheets of ice that covered much of the northern part of the US and nearly all of Canada went around the Driftless Area. How did that happen? There are a couple of primary thoughts regarding this. The first and most likely is a result of the highlands of northern Wisconsin and the Upper Peninsula of Michigan (UP). The second is slightly more complex and factors in the amount of liquid water at the base of a glacier. Liquid water? At the base of a glacier? Yup - and I'll mention why later in this post. 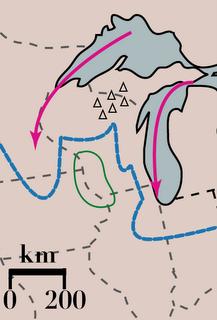 The most cited explanation (e.g. Syverson and Colgan, 2004) for why the glaciers bypassed the Driftless Area is because the area in northern Wisconsin and the UP is topographically higher (even pre-glacier) than the surrounding region (see figure on the right). This diverted the glaciers around them, and slowed its movement enough to prevent the ice from covering the Driftless Area (green circle). A subset of this idea is that while lakes Superior (upper left) and Michigan (lower right) were not as they are today, they were likely topographic depressions that would have acted as channels that encouraged ice to flow through them, bypassing the area inbetween. These hypotheses are quite robust - they explain how the Driftless Area avoided being covered by ice, and are backed up by a great deal of geological evidence such as glacial deposits, glacial striations on bedrock, and computer modeling.

Another possibility is that the porosity of the bedrock in the Driftless Area absorbed the liquid water at the base of the glacier, and prevented it from flowing into the region, "gluing" the ice to the ground. So how does water get to the base of a glacier? One is that this far south, there was a considerable amount of melting going on, even in the winter (it is warmer down here than it is way up north, after all). This water flows down through the ice and often finds its way into (or creates its own) channels along the base of the glacier. Another way is through pressure. With increased pressure, the temperature required to melt ice decreases. At the base of the glacier the pressure is sufficiently high enough, and it is not cold enough, so that water can exist. This film of water acts much like the film of water beneath a pair of ice skates - reduces friction and allows the ice to flow faster. No water, no flow (or very, very little). Hence, the Driftless Area, with its porous bedrock allowed water to get away from the glacier, and prevented the ice from moving.

This film of water is also what alows modern glaciers to surge, sometimes a hundred meters or more in a day. The water reduces friction so quickly that the ice just shoots down the valley. With increasing global temperatures, the chances of more glaciers surging increases. Without increased input of snow and ice near the head of the glacier, it could disappear all the more quickly. Granted, this is a simplified prediction of a complex process, but in basic terms, it's one of the concerns glaciologists have as the earth's temperature continues to rise.
Posted by Matt Kuchta at 9:14 PM