What is the Driftless Area? 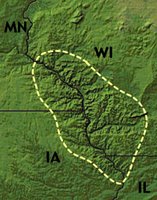 Simply put, the Driftless Area is the region in Southwestern Wisconsin, Southeastern Minnesota, Northeastern Iowa, and Northwestern Illinois that was not covered by the late Wisconsin glacial ice and has a characteristically rugged topography. The broad plateau of paleozoic bedrock (mostly limestone, dolostone, and sandstone) is deeply dissected by the river drainage systems here because this area has been exposed to weathering for much longer than the surrounding area. Glaciers act as a kind of eraser - resetting many geomorphic features by planing off the high regions and depositing a thick blanket of glacial sediment, referred to as a 'ground morraine.' The older name for undifferentiated glacial sediments was 'drift,' hence the name for this region.

map data available from: http://seamless.usgs.gov
My research revolves around looking for snails buried in alluvial sediment within the Driftless Area. These late Pleistocene-aged snails were living in this region while there was ice less than 100 kilometers away. There's evidence for permafrost - and permafrost requires a mean annual temperature below freezing. While permafrost would inhibit the growth of trees (too cold, frozen ground prevents rooting), there are snails in the southern part of the Driftless Area that feed primarily on deciduous trees. This suggests that the permafrost was not continuous in the south, but perhaps it was farther north. One of my goals is to describe where different snail species are present and where they are absent (although absence of evidence is not exactly evidence for absence). Significant changes in the distributions of various species could indicate where there might have been some trees hiding from what must have been a cold and rugged climate. So maybe it wasn't as cold and nasty as people think - at least in some places.

So, why did the glaciers miss this part of the country? That's a post for another day...