It's not what you eat: it's the way how you chew it.

Going through my samples that I had collected this past fall, I came across a few examples of predatory attacks on snails: 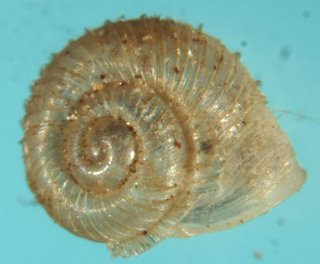 The aperture of this Vallonia sp. was peeled back considerably - perhaps about 1/3rd of the entire body whorl. Yet the snail was able to regrow a new aperture (albeit short of the original length). As you'll see later, the regrown shell does look scarred - like a healed burn or deep cut on our skin. There are two points that are most interesting to me here: 1) this snail is less than 2mm wide, and 2) the snail survived an attack from a predator small enough to delicately peel back the shell of this tiny snail (my guess is some kind of carabid beetle). 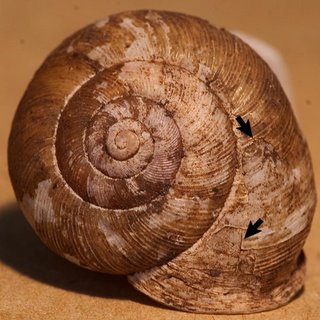 At least, I assume it's a Neohelix. It's about 3cm wide and fits with descriptions that I've looked up. Aydin - if you have a better ID, I'm all ears. What really amazes me about this snail is the fact that it survived at least two different attempts to peel away the shell (black arrows). 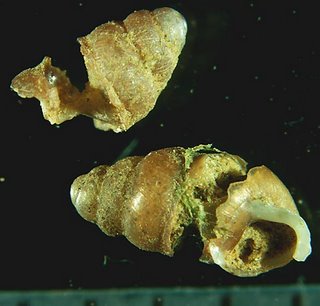 The "White-lipped Dagger Snail" (cool name) has only been reported for the area where I found it once (Theler, 1997). However, the hill prairies of southwestern Wisconsin are under reported and surveyed, so I'm not surprised. What impresses me about these sampes is that there is a predator dextrous enough to peel back the body whorl to get the snail inside. I know that some birds and shrews eat land snails, but to peel back a shell at this level of detail probably requires something smaller. Something in the Caribidae, perhaps (ground beetles).

This relates to a post by Aydin: about snail predation as regards snail survival. As biologists (paleobiologists) we often see the remains of what doesn't work. Given the mathematical nature of the intrinsic rate of increase, it does not take much change in this rate to result in a significant improvement in reproductive success.

There are many changes in shell morphology that have been assumed to convey some improvement in success for terrestrial gastropods. Most of these have to do with the thickening of the aperture or "teeth" inside the aperture. However, my thought is, that the most successful adaptation for snails to survive predation is the mantle's ability to reprecipitate calcium carbonate.
Posted by Unknown at 5:00 PM