I've been busy. The semester is starting up again, so that means another round of rocks, minerals, volcanoes, earthquakes, rivers, aquifers, deserts, and glaciers (to name a few). I've also been frantically counting snails during the winter break. I've spent about 10 days this month going through the snail shells my student researchers have meticulously plucked from sifted samples of leaf litter (a nice double alliteration, that - triple if you count the 'eff' sounds). 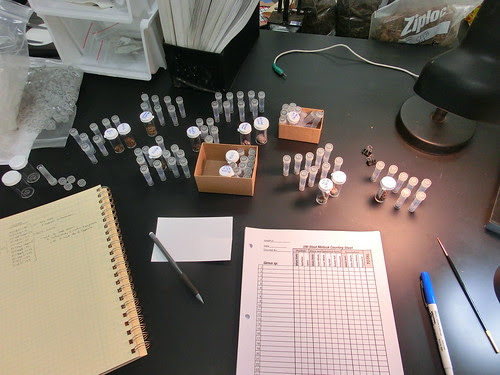 This is what sorting snails from a sample looks like. Organized by species from each site, each individual snail marked on the tally sheet. The counting sheet is set up to record fragments and each of those mutually exclusive pieces contributes to the total. Thus, if I have ten complete shells plus one aperture and four spires, I can reasonably assume that I have at least fourteen individuals, since one of the spires may have broken off the aperture.

The minimum number of individuals for each species becomes a measure of abundance at a particular site, while the total number of species at a site is its diversity. Some sites are more diverse than others. Some sites have low diversity but high abundance, while other sites have high diversity and high abundance. In addition to simple numbers, there are species of snails that show up at many sites and there are species of snails that only show up at a few sites. The species of snails that only found at a few sites are of particular interest for our research - are they limited to special environmental conditions? Are they rare because they are specially adapted to a particular habitat, or has our history of land use and alteration changed a once favorable landscape?

I don't have a lot of answers to these questions yet, but the report on our findings is due to the Department of Natural Resources at the end of the summer. And that report needs data - the rather tedious data that comes from picking, identifying, and counting snails. And many of these snails are quite small. Some of them are less than two millimeters long. And so I've spent many hours sorting, identifying, and counting snails. And piling up a huge stack of tally sheets. 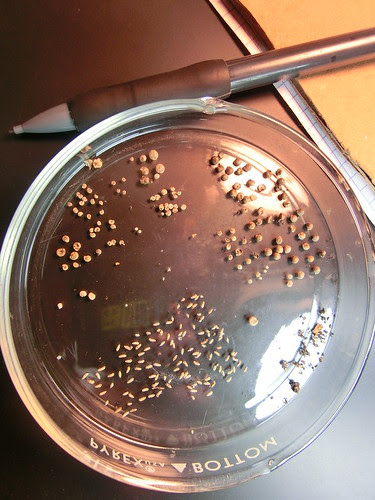 Here's a selection of tiny snails, sorted into species, ready to be counted and placed into their very own container for reference and eventual storage in a museum collection to aid future research. 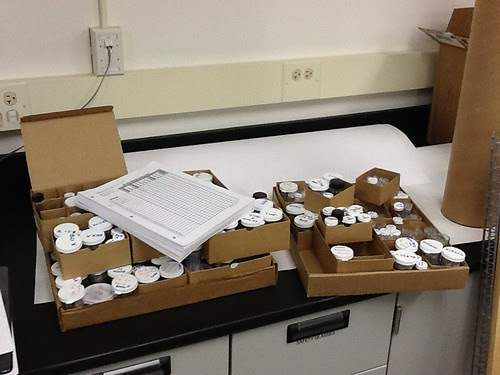 The results so far: vials of snails and a stack of tally sheets.

And so it was that I began adding up the total number of individuals from the tally sheets. A number that got bigger and bigger as I kept going. 1,000... 2,000, 4,000 and the number kept growing. 5,000... 7,000... 9,000... at 9,847 I realized that I would soon cross a rather nice landmark. So I sat down today to count a few more shells. I pulled out a sample and quickly climbed up to nearly 9,980. The next sample had only a few shells and brought me to 9,993. So close. I opened up a third sample - the first species had only three shells. The next one I opened also had three. So the next vial would be it. I pulled out a container with a rare snail that I had only found at a few places, and there were two shells. The first one I saw was a nice, large specimen of Vitrina angelicae. 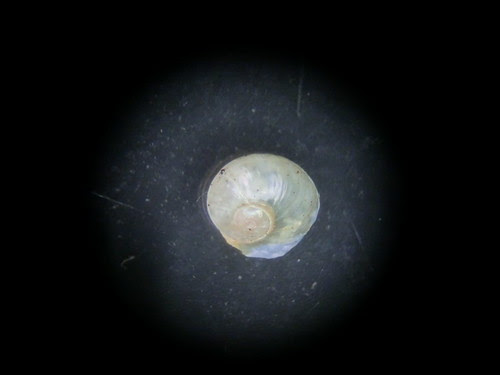 Our work in western Wisconsin is one of the first such surveys in this part of the state. Many of the species represent the first county records. For example, here's a map from the DNR showing where they have records of this species' occurrence. Currently, V. angelicae is listed as a "species of conservation need" meaning that we just don't know enough about this animal to say whether or not its endangered, threatened, or just shy. 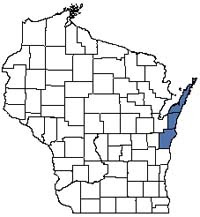 I've blogged about the bias in snail distribution data from Wisconsin before - our research has been adding many new patches of blue in the western counties. Despite the tedious and time-consuming nature of this kind of work, it's immensely satisfying to know that the 10,000th snail I've counted is helping stretch the known range of this snail across Wisconsin, giving us a better idea of what we've got and just how precious it is.
Posted by Unknown at 10:03 PM