I ran a demonstration in my soil mechanics class today, showing the role of "geofabrics" in Mechanically Stabilized Backfill (MSB) retaining walls. The basic premise is that the soil particles behind a retaining wall are trying to slide past each other and move downhill. This sliding motion (called shearing) is how soils typically fail - soils are weakest in shear. If we can increase the shear strength of soils, we can greatly enhance their overall strength. By adding "geofabrics," which are often woven or extruded plastic grids, the soils transfer the shearing to these sheets. 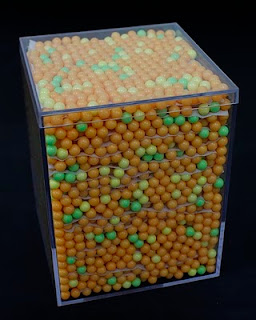 I started by packing layers of plastic BBs between pieces of damp paper towels. The BBs will try to roll & slide past one another - but this motion (shear) is opposed by friction with the paper towels. Result: the BBs don't move. When I flipped over the stack of BBs/Paper Towels, the stack of BBs stayed put. Some BBs near the sides fell out, but most of them remained - prevented from sliding past each other by the paper towels.

The first attempt didn't work well. But by packing them more evenly and lifting the container slowly, I was able to keep the pile of towels/BBs stable: 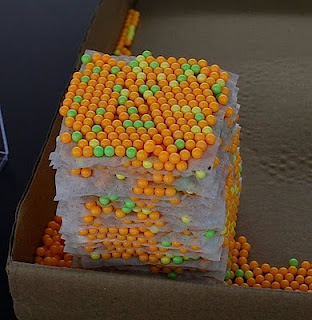 It's surprisingly strong: it was able to support the weight of several large textbooks: 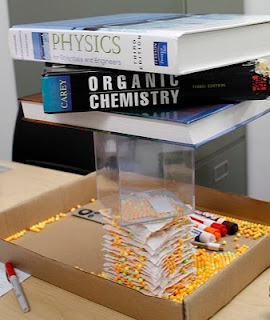