So the Accretionary Wedge theme is "Important Geological Experience." I thought I'd post a picture from my first major geological field trip (in "deskcrop" format as per next month's AW). 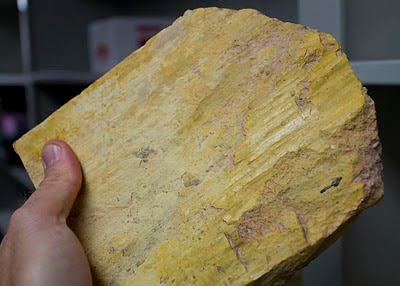 It's a fault-polished piece of the Bighorn Dolomite. I collected it in March, 1996 as part of a spring break trip to Wyoming. It was one of the first times I realized that I could "do" field geology. And, most importantly, to look at the rocks. It was one of those moments where the instructors had just taken us through the stratigraphic section of central Wyoming, pausing at the preCambrian igneous/metamorphic rocks. Just a few yards away was this highway road cut through Ordovician dolomite.

One of the instructors put me on the spot, asking me to speculate on how one might get ordovician rock sitting next to preCambrian basement rock (skipping all those cambrian rocks in-between). The outcrop was nothing special - in fact, much of it was covered by talus and vegetation. But, being a minting geologist, I thought for a moment, then looked at the rocks by my feet. There was a chunk of beautifully polished dolomite. "A fault" I said, holding up the sample. I managed to earn "field-trip-brownie-points" not only by providing a reasonable answer, but also a piece of material evidence for my idea. Even today, if the geologic story in front of me does not seem to make sense, I make sure to look down at the rocks by my feet.
Posted by Unknown at 9:58 PM