In many ways, geology is a study of fractals. There are many geological systems that display the characteristics of fractals. Mandelbrot's famous fractal pattern resembles the coastlines of many areas of the globe.

River systems, such as the "Driftless Area" in southwestern Wisconsin display a beautiful fractal geometry: 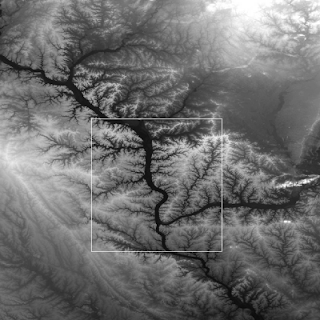 A shaded elevation map of of the Upper Mississippi River region (white is higher elevation). The Mississippi River is the thick black area running diagonally through the image. The white square shows the zoomed-in area for the next image. 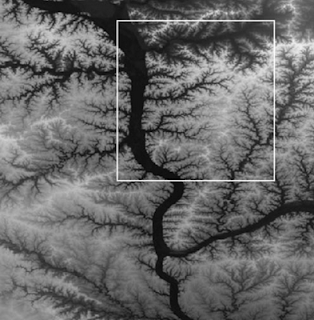 Zoom in 50% - more fine-scale details appear, but they are remarkably similar to the larger-scale ones. 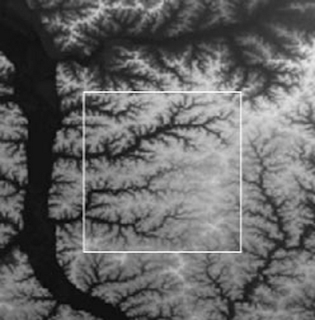 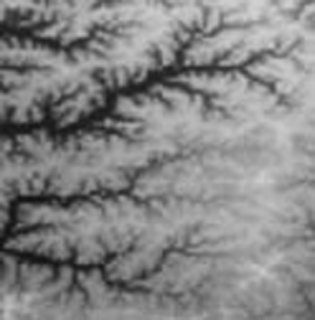 And another 50%. We're looking at 12.5% of the original image. My starting resolution was a little rough, so the digital artifacts of the raster image is getting in the way. But you get the gist - in ArcGIS, one can adjust the color ramp, which produces patterns amazingly similar to mathematical fractal patterns. I've been searching for some more technical analysis of the Driftless Area and its fractal geometry, but so far I've come up short. If any of you are aware of some good landscape geo studies, feel free to share.

Finally, another type of fractal pattern can be seen in near-vertical exposures of rock. Small parts resemble the larger outcrop, even down to individual piles of debris. 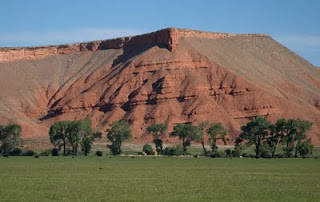 Triassic (chinle equivalent from the Bighorn Basin - the name eludes me right now) redbeds. This is a pretty darn good representation of the Sierpinski Triangle. Oh, and I got an interesting comment from a young-earther related to this photo. I'll have to share that sometime...

There are plenty of examples of other landscape fractal patterns. One thing that strikes me, however, is that - despite this self-similarity - there are breaks in the "scaling." Take a mountain range - from far enough away, it looks relatively smooth and small. Zooming in, reveals topographic changes that start to look self-similar, down to a certain smaller scale. Then, the characteristics of the individual rocks take over. Phenocrysts, ground mass, local variations begin to render one outcrop different than another. But, zoom in further, so that an individual phenocryst has the apparent size of a mountain, and this self-similarity shows up again. It begins resembling, at least in part, the larger mountain range at big scales. You jump down to the microscopic, molecular level, and the characteristics of the individual mineral take over yet again. Zipping into sub-atomic scales, we see vast empty spaces, filled with electrons, protons, then quarks and gluons and all sorts of Dr. Suess-like particles and physical interactions. Interestingly, this sub-atomic scale, superficially at least, resembles a super-duper-macro-scale view of the solar system and universe.

So, do these "jumps" in scaling represent some kind of "boundary condition" within which the fractal system must operate? Or is the idea of "self-similarity" in the landscape incorrect? Is it something different - a rough approximation, but not really the most useful concept for describing and exploring the natural world?
Posted by Unknown at 8:15 AM