A recent post by Aydin at Snail's Tales recently got some shells of an African land snail, which were the leftovers of a meal rich in snaily goodness. These are among the largest of terrestrial gastropods; very impressive critters. In some regions these are kept as pets.

This brings up an interesting point: in the U.S., it is illegal to keep live GALS. The reasons being economical and ecological. They are voracious eaters, are highly fecund, and can carry parasites harmful to people. The last reason is touted by the CDC and other government agencies, although no cases of snail-transmitted meningitis has been reported.

Recently in Wisconsin, there was a sweep of pet stores, private exotic pet owners, and schools in the Milwaukee area and more than 100 snails were confiscated. So if your classroom has an African land snail as a pet, the recommended thing to do is to contact APHIS at the USDA to have it removed. DO NOT release these critters into the wild! There may be a case-by-case way to get a permit to raise live GALS, so if you want to raise them, be sure to do your homework.

That being said, they are amazing animals - their size alone makes them pretty unique among gastropods. I can't imagine empty shells are a problem, and I would love to have a few as an example to show next to some of the smallest gastropods such as Carichium exile. Oh, and there must be some fascinating ecological implications of body size, egg volume, and habitat that are just waiting to be done. 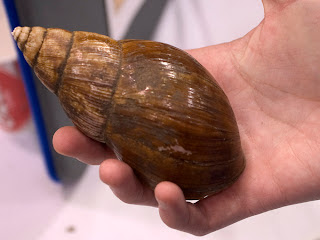 GALS from an exhibit by the USDA 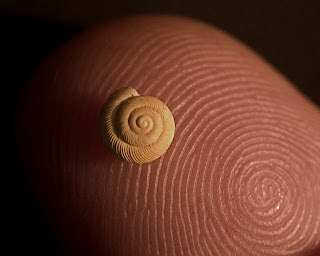 Discus whitneyi from Iowa - a smallish land snail.
Posted by Unknown at 8:43 AM