The snail that wasn't: Columella

I have been surveying our local woods and found this particular snail: 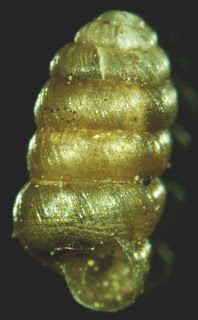 At first, I thought I had come across Columella columella alticola. It has a narrow penultimate whorl, tall, columnar shape, and prominent transverse striae. I was rather excited, as this species hasn't yet been found in Minnesota yet. Alas, after talking to several people who have seen multiple Columella edentula (=simplex), it is most likely a columnar morph of that species. This is based on the tapered spire (alticola has a more domed top) and the minimally pinched penultimate whorl. All is not lost, however. The columnar morph could be a separate species. But it will take a much larger sample population than just one shell to determine this. Motivation to keep looking.

Now that the ground is frozen and draped with a 3" blanket of powdery snow, further surveys are on hold. I'll be back in the spring to resume the hunt.
Posted by Unknown at 5:03 AM