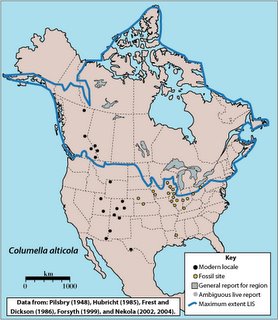 I drew the above distribution map for Columella columella alticola based on several sources (see graphic), including my own research. The open circles are Pleistocene fossils and the dark dots are modern sites where they are found. The species name indicates it's simlilarity to the European species C. alticola. So how does a snail so similar to its European cousin get across North America? Aydin at Snail's Tales discussed the distribution of another holarctic land snail. One of his suggestions for distribution on two continents was via plate tectonics. Personally, I think genetic drift would have resulted in greater phenotypic difference over the 200 million years since Europe and North America were last next door neighbors. 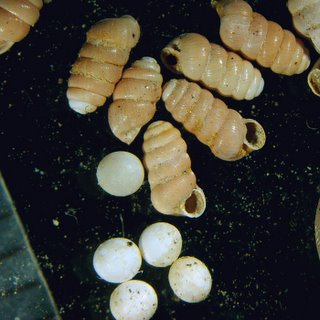 Columella columella alticola and snail eggs as Pleistocene fossils from the midwest.

If not tectonics, then what? Looking at the distribution, I wonder if many species of snail took advantage (if I may anthropomorphize a little) of the Bering land bridge. Given that there are several species that share this holarctic distribution (eg: Z. harpa, C. columella, P. muscorum). So, how do they do it? Birds, wind, large mammals? And how might one differentiate between distrubution via tectonics versus land bridges? DNA studies for one, but the other would be better time control on fossil distribution. A project too grand in scope for my own dissertation, but perhaps there are some paleontologists who have already started on this project?